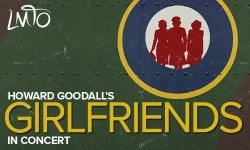 Next week Howard’s 1986 musical Girlfriends makes its return to London in a concert version (with narrator) with full orchestra (and brand new orchestrations) and a cast of West End stars, conducted by the magnificently energetic & charismatic Freddie Tapner.

“..a blazingly dramatic score.  Mr. Goodall has a wonderful gift for reflecting situation in melody. It rises effortlessly to the occasion for ardour, grief and protest.” Irving Wardle, The TimesOctober 1987

“Goodall has come up with some splendid choral numbers, expressive of joy, grief and, above all, the will to win.” Francis King, The Sunday Telegraph October 1987

“Mr. Goodall has been dealt a strong Parryesque hand as a composer. The music itself is sinewy, rich, trumpet-dominated, and distinctive.” Michael Billington, The Guardian October 1987

“He excels at the orchestral accumulation of narrative power – making classical use of Bach-boogie, Forties’ harmonies, instrumental continuo and obligato, which colour and enrich the score throughout.”
Michael Ratcliffe, The Observer October 1987

‘This LMTO concert performance of Girlfriends will be recorded for release as a digital and physical CD shortly afterwards. The link to Howard’s CDBaby Artist Page, where the release will first be available is https://store.cdbaby.com/Artist/HowardGoodall‘