The first of three CDs for Classic FM as part of Howard’s year as Composer in Residence, Enchanted Voices features 8 young sopranos sourced by Howard, who normally sing with choirs like The Sixteen and The Monteverdi.  As a group they combine to create an ethereal and angelic vocal sond against an interweaving solo cello and occasional handbells.

The album includes eight `Beatitudes’, blessed chants from the Book of Matthew, for groups whose actions or burdens single them out for tribute from Christ. His arrangements of biblical prose include `Beati Pauperes (Blessed are the Poor)’ and Beati Mundo Corde (Blessed are the Pure of Heart).

There are also 4 new “Beatitudes” composed entirely by Howard, including `Pro curatis (For those that are cared for)’ and `Pro Eis Sine Domo (For the stateless)’, which sit alongside the original, flawless chants.

Howard wrote an article about the composing of the CD which can be found here.

More about Enchanted Voices can be found here.

The CD can be purchased through Amazon here. 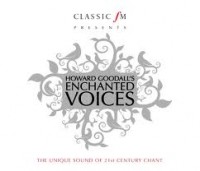