We Are The Burning Fire

‘We Are The Burning Fire: songs from a small planet’

Howard’s travels have taken him all around the world, and in visiting countries as far apart as Iceland and Japan, Italy and Brazil, he has discovered a musical world with roots far different from the classical ones of his training. The recording We Are The Burning Fire is the result of Howard’s exploration of music from around the world. Rather than simply a collection of songs from around the world, however, the album features Howard’s original arrangements of worldwide folksongs, performed by Christ Church Cathedral Choir, Oxford, directed by Stephen Darlington. “I came across songs that I had to respond to as an arranger,” explains Howard, “making it my own and introducing this wonderful music to a much larger audience through the medium of solo and choral singing. The selection is itself a journey round the world.”

The recording also features the Chamber Orchestra of London, and a host of accompanying instrumentalists including John Harle (saxophone), a Brazilian percussionist, a hammer dulcimer expert, and Howard himself on keyboards.

We Are The Burning Fire is available now on the Metronome label (catalogue number MET CD 1040). You can order this CD through Amazon.

Reviews of this CD can be found here. 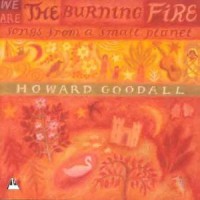