Christmas Cantata was first performed by the choirs of St Luke’s United Methodist Church, Houston, Texas (Director of Music and Fine Arts, Sid Davis), on 15 December 2019, conducted by Howard Goodall CBE, with soloist Grace Roman.
The première performances were supported by St Luke’s Friends of Music.
Romance of the Angels originally commissioned by the BBC Singers

To See Another Sun originally commissioned by St Mary’s, Barnes

Romance of the Epiphany and Lullaby of Winter originally commissioned by Christ Church Cathedral Choir, Oxford

Christmas means many things to different people around the world. The nativity story itself was brought to the centre of the celebration by Franciscan priests in medieval Italy, with the addition of sung, festive carols and makeshift mangers. This was a (highly successful) effort to encourage farming communities, especially isolated hill- and mountain-dwelling shepherds and goatherds, to join church services. Hence

the newly boosted narrative role for shepherds and their flocks in a story set in an arid desert landscape.

For me, the nativity story – however literally one addresses its mix of anecdotal, historical, mythical and blurred-by-time details – carries a very powerful, universal message. It tells of a poor mother and her child, in difficult, fragile circumstances, seeking refuge in an unfamiliar place. They are not reduced to a footnote of the tale but elevated to the very point and purpose of it. The smallest, least important people,

usually at the edge of the frame, stand centre-stage. Power is transferred from a mighty empire to a child.
We have been reminded in recent years of the significance and potential of immensely courageous children, from Malala Yousafzai to Greta Thunberg. So the subtext of the Nativity is clear to us, whether or not we believe the child in question was in some sense a manifestation, offspring, or representative of God.
This cantata’s underlying theme, therefore, is that the joy of hope is expressed in this famous birth as representative of all births, that children are the beacons of our future and that caring for the vulnerable, the needy, the displaced has never been more urgent and germane.
“When I am there to help relieve an unknown person’s grief

I am Christmas Day” 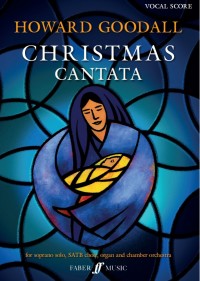