Never to Forget was commissioned by the London Symphony Chorus as a musical memorial to the many UK health and social care workers who died caring for others during the 2020/21 COVID-19 pandemic.

It pays tribute to 285 people who were among those to die, and those whose names have yet to be revealed. The use of their names was treated sensitively, and bereaved families were contacted, whenever possible, through NHS trusts and care homes. We also consulted the NHS Confederation and NHS Employers, the NHS England People Directorate, the Royal College of Nursing, and the British Medical Association, and are grateful for their advice, support and help.

When I was asked by the London Symphony Chorus if there was something I could write that might provide them with a vocal response to the COVID-19 crisis, I asked if they would consider a to memorialise the health workers who had lost their lives whilst saving those of others, during the pandemic.
I described it as an organic, living memorial version of the Menin Gate or the Thiepval Memorial on the Somme, where the names of thousands of fallen soldiers of the 1914-18 war are etched into their stone walls. Yet unlike a stone memorial, whose striking solemnity is unchanging, the choral work I have composed, Never to Forget, is designed to live on in performance after performance, an act of remembrance that looks backwards with respect, love and gratitude but
that flows onwards, always evolving, in real time, in the present tense, indefinitely.
The names of those that have died are sung one after another, separately. The rhythmic shape of the melody line is entirely dictated by those names. We researched as conscientiously as we could correct pronunciations, without disturbing the families concerned at a time of deep private grief. We, as makers of music, offer to the friends, colleagues and families of the deceased something, we hope, from our hearts to theirs, to all those mourning health workers who have died since the pandemic began. I can think of no commission I have undertaken that had a more
poignant, worthwhile reason to exist, to be added to the great sum of music already written,than Never to Forget, which will forever belong to the people whose sacrifice it honours. 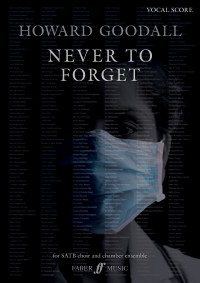