Commissioned by London Musici (Artistic Director: Mark Stephenson) to celebrate its 20th anniversary as both a choral-orchestral-dance piece for London Musici, The Choir of Christ Church Cathedral, Oxford, and Rambert Dance Company (Artistic Director: Mark Baldwin) and as a choral-orchestral work. It received its première at The Lowry in Salford on the 25th September 2008.

Talking about composing the work, Howard said – “Most requiems are based, one way or another, on the medieval church’s Mass for the Dead, which is made up of a series of sections (‘movements’) beginning with the ‘Kyrie Eleison’ (Greek meaning Lord have mercy) and ending with ‘In Paradisum’ (Into paradise).  Although the traditional requiem text calls for ‘eternal peace, rest and light’ for those who have died, it also emphasises judgement and everlasting damnation for anyone who transgresses the Roman Catholic Church’s code of behaviour, as seen from the perspective of the Middle Ages. I did not feel at ease with this approach to the appalling pain of loss and grief, so in an attempt to provide some solace for the living that mourn, I stripped down the old Latin texts to a few phrases in each movement and laid beside them words from English poems from across the last 500 years.

A Guardian Article about Eternal Light can be found here 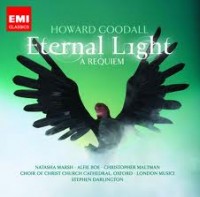