In November 2020, with most of the planet still grappling with the challenge and jeopardy of the COVID-19 pandemic, locked down at home in London, I received a message from Sid Davis, Director of Music and Fine Arts at St Luke’s United Methodist Church in Houston, Texas, wondering if I might consider a commission to address the new, strange and difficult world in which we all found ourselves.Perhaps it would be something to look forward to when live, collective performances were once again filling churches, concert halls, colleges and schools. An idea immediately came to me, which probably means it had been quietly fermenting in my subconscious for a while.

Unconditional Love, as it became, is at its heart a work of gratitude,remembrance and of hope for a world rebuilt. It gives thanks to all those whose sacrifice and selflessness has been so powerful and so moving a feature of the covid-19 crisis. It honours those who have died, as carers, as patients, as family members and dear friends. It reflects on how much we took for granted about our relatively charmed existence before the pandemic and how much we learned, once more, about the simple needs and pleasures that became ordinary lifelines in the lockdown. For many people, the restriction on constant activity and travel, irksome though it undoubtedly was, allowed them a more considered view of their community and their immediate surroundings.For the young it has been particularly hard: the freedom, fun, collaboration and discovery that is so integral apart of growing up has for two years been largely denied this generation. They bore this burden to protect others more vulnerable than them. Perhaps the least we parents, grandparents, aunts,uncles and adults in general can do in return for their forbearance is to tackle with greater urgency the issues that concern the young most: equality of respect,irrespective of background, ethnicity or gender,safety from violence for women and girls,and the spectre of an existential climate crisis.

To date, around 6 million people worldwide have died of covid-19 and I could not compose such a piece without reference to the dreadful pain and loss that these figures represent-each death an unspeakable tragedy for their loved ones. Katherine Garrison Chapin’s Bright Mariner, written in 1936 after the death of her 7-year-old son, provided me with a luminous, intimate text with which to face that grief, and perhaps offer some solace. The cantata’s final movement raises that other, parallel, pandemic-that of isolation, loneliness and depression, and makes a plea for us not to walk away from these problems as the world begins its recovery.

The cantata begins, however, on the Massachusetts shore in 1620, and traces the Plymouth Brethren’s first, religious observance of thanksgiving for deliverance from the peril of the journey and the harsh battle for survival that followed. It expands out from this, via the other multitudes that crossed the Atlantic, to the present day’s secular festival, which focuses on families and friends celebrating their happy reunion. The global pandemic has made us acutely aware of the importance of the love we share with those close to us,forcing separation and distance upon us, notwithstanding the technology that helped bridge those great divides.

The millions who sailed voluntarily to the New World in search of a better life, arriving at Ellis Island, bewildered and destitute, had two most treasured things in their possession: the pilot light of hope in their eyes, and the fact that they made the rough crossing not for their own sakes, since what lay ahead for them were years of further hardship, but for their children’s and that oft heir children’s children. This gesture had no strings attached: their sacrifice,their endurance, their love was unconditional.

Unconditional Love: A Cantata of Gratitude and Remembrance is not an explicitly religious work, though it belongs in one sense to a long tradition of cantatas and oratorios that are. Choirs of all kinds, in all places, will find, I hope, common cause with its themes and aspirations, as they regroup post-pandemic. There is no greater privilege for a composer than to find a space and a voice for communities to pause, for a moment, to mark together the perils of the journey taken, and,hopefully, the passing of the storm. 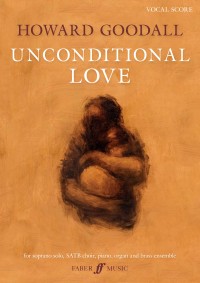