Written & presented by Howard, Choir Works (1998) is a series of four half-hour programmes exploring choral singing around the world. The series covers various contrasting traditions, and aims to show that the word choir means a lot of different things to different groups of people. In choosing choirs to feature on the series, Howard wasn’t merely looking for people who sang nicely in their spare time. He picked choirs whose singing included an additional element, whether political, social or historical.

In the first programme, Howard visits Estonia, where singing was an integral part of the 1990 revolution. Howard explains that “on one occasion a third of the population, which must be unique, was out in the squares singing… Their folk songs have tremendous potency because they were banned under the Russians and now have all this meaning attached to them”. In Bulgaria Howard met a modern choir who sing in the traditional, throaty style typical of the country, and also went into the mountains to hear Babi – or grandmothers – singing songs relevant to their chores, such as a bread-making song.

Howard visits the Zulu people of South Africain the second programme. During the oppression they have faced, the Zulus have used choral singing as a way of keeping hold of their cultural identity. Howard travelled to the Zulu heartlands to find true, unmodernised singing of the Iscathamiya style that was made famous by Ladysmith Black Mambazo on Paul Simon’s Graceland album.

The third programme in the series features another form of music which grew out of oppression: gospel. Howard travels toNashvilleto discover how gospel music originated… “When the slaves went to church with their white masters, they sang hymns by Wattsand Wesley. The words struck a chord because they’re all about deliverance, but they didn’t much care for the white man’s tunes. So they went back to their quarters and sang the same words to old African tribal chants in a style known as metered singing…” In one primitive Baptist church in Nashville, Howard found that some of the oldest members of the congregation could still sing in this style. “It was quite extraordinary… like watching history without the people doing it being aware.”

In the final programme Howard returns to his old college,Christ Church, Oxford, to visit the Cathedral Choir. He talks to the choristers – some as young as 7 – about a lifestyle which involves singing evensong each night, as has been done at the Cathedral since 1526. Howard looks at the centuries-old English Choral tradition, as continued at Christ Church, and also visits Salisbury Cathedral to investigate the effect of the presence of girls upon this tradition.

Information about DVD availability of this series can be found by contacting Howard’s PA via the contact page.

Review of the series from Australia:

The Age (Melbourne) 29.01.2000:  “Howard Goodall’s Choir Works Goodall is always good to hear, a rare man who loves music and can talk about it without pomposity or obscurity.” 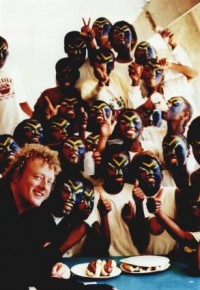