Commissioned for the opening of The Sage, Gateshead, December 2005

“How Easy it is.. when you are you young

To change the world completely with a single kiss

How easy it is, that childlike state

Where youth and hope entwined can lead to this: A bond restored that once was lost

A sea of separation crossed

Whatever fate may yet unfold

A mother lives, a child’s consoled

Though icy storms may yet prevail

Who would not smile to ell the tale?

Who would not hear our winter’s tale?”

“It’s very typical of the composer – to my mind (and ears) the best contemporary British composer of musicals we have – to take a problem play and turn it into a glorious opportunity. He writes melodies with aching undercurrents and compressed emotions that are perfect for distilling the essence of this troubled, troubling play of marital suspicion and bad conscience that seemingly fatally undermines a happy marriage. There’s also a rich seam of fantasy and wonder as his abandoned daughter grows up to fall in love with the son of the man he suspected of adultery with his wife”

Goodall’s score is remarkable; he has a masterful command of harmony and remains lyrically bold. The opening number, Comrades, almost fugue-like in style, is an exceptionally powerful opener, while the lyrical gem Found On A Beach has to be up there with Goodall’s best.

Act One takes place in a totalitarian state in the early 1950s, somewhere not unlike Soviet Ukraine or Gheorghiu-Dej’s Romania. A winter of discontent.

Act Two takes place 16 years later in a neighbouring, more liberal state, on the sun-parched shores of a warm sea, perhaps like Papandreou’s Greece, or Tito’s Yugoslavia. The second generation awaken a summer of love…. 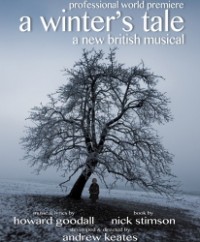