Silas Marner was commissioned for the Salisbury Festival in 1993. It was premièred in Wilton Parish Church, and then given as a full-scale production by the City of Birmingham Touring Opera – directed by Graham Vick and conducted by Simon Halsey – in December 1994. Housed in a huge space under the Bull Ring Centre in Birmingham, this was community opera at its most vivid; a cast of hundreds of local amateurs played alongside professionals to provide an immediate and real sense of a tight-knit community.

Howard chose to adapt George Eliot’s novel Silas Marner because of his attraction to stories featuring an individual pitted against a community: “Unlike many 19th Century novels which are quite gloomy, Silas Marner is very positive about human nature and has a wonderful redeeming ending. It raises issues concerning parenthood which are relevant today and also very close to my heart. There were also geographical reasons for choosing it. I first discussed writing it with the City of Birmingham Touring Opera, and Silas Marner is set in a small weaving town in theMidlands.”

Howard wrote the libretto as well as the score, and was pleased not to have to abridge the novel too drastically: “The great thing about Silas Marner compared to other 19th century classics such as Oliver Twist or Les Miserables is that it is comparatively short! You can use the whole story and do it justice in just an hour and a half”.

Silas Marner is a work which does not fit clearly into a particular genre; Howard describes it as “a music-drama because of its idiom. If I were to sit at the piano and play the music, you would say it is a musical. If, however, you had seen it performed in Birmingham, you would say it is an opera. If I had to plump for one or the other, I would call it a musical.” Music critic Edward Seckerson has said of the piece: “In keeping with the fashion, it sits somewhere between opera and musical: through-composed, but basically a collection of songs.” and Opera Now said “Goodall’s evocative score. Catchy and tuneful, it is skilfully constructed” 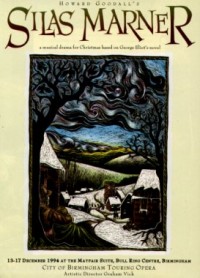