10 years after the celebrated film, Bend it Like Beckham the musical hit the West End stage and began previewing at the Phoenix Theatre, London in May 2015 running for over 9 months before preparing for international tours.

The original book was written Gurinder Chadha and Paul Mayeda Berges, the music is composed by Howard Goodall with lyrics from Charles Hart.

Nominated for 5 Olivier Awards, Bend it Like Beckham also won the Asian Awards for Best new Musical, the Critic’s Circle Award for Best New Musical and the Time Out Readers’ Award for Best West End Musical.

BACK OF THE NET!
Rejoice! In the midst of Fifa’s dismal doings musical theatre makes football beautiful again. Gurinder Chadha’s and Paul Mayeda Berges’ fable, of a British-Asian teenage girl longing to play football rather than cook dhal and live traditionally, was beloved on screen but emerges all the stronger for being driven by Howard Goodall’s music and Charles Hart’s lyrics. It’s a lovely show, with the rare quality in musicals of feeling all-of-a-piece: one solid creation by a team who understand one another and were allowed to get on with it.

Here are a selection of videos from the show including  the West End trailer; UB2 video; the making of the UB2 video; Gurinder and Howard talking prior to the launch; the ‘Coconut Ceremony‘ on 1st day of rehearsals; 1st week of rehearsals; from the director half way through rehearsals; backstage at rehearsals; Howard Goodall introducing the Sitzprobe;  cast arriving at the Phoenix theatre; West End opening night report; at the 5th Asian Awards and Jamie Campbell Bowers interview both at the Asian and Olivier Awards;  BiLB Harriers training with Tottenham Hotspur Ladies’; at the Olivier Awards and   2015 Children in Need performance. 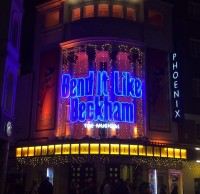 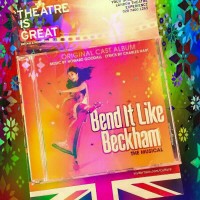 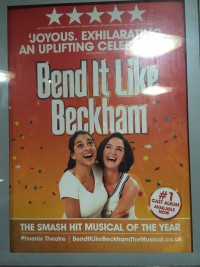