Freely based on William Shakespeare’s

“Imagine the scene. A rich, verdant, abundant forest, green and perhaps starting, just, to turn golden, stuffed with flowers that bring bursts of colour and fragrance to every step along the worn path; vines, trees lush with fruit, pine-cones and leaves; a hill, where shadows flicker and dance in the corner of your eye; a lake, shimmering and glistening in the moonlight; and a circle of stones, a remnant of a bygone pagan life. It’s that last summer before the start of the First World War and there is an innocence, a sense of propriety, of tradition, of formality, of long skirts and three piece suits permeating every corner of the forest where the moonlight darts and transforms. It is a place throbbing with possibility – sensual, lustrous, ripe and with just a touch of uncertain mystery. A place where magic could so easily happen. Got the image in your mind? Good, because that is the setting for Howard Goodall and Charles Hart’s magnificent musical adaptation of Shakespeare’s A Midsummer Night’s Dream..”

“Really, Hart’s work here is outstandingly good. And he inspires Goodall, whose musical tunes, harmonies, counter-points, polyphonies and flourishes are absolutely exquisite. The music is full of passion, joy and expression, the second Act in particular. There are jaunty tunes, reflective songs, rousing choruses, intriguing ballads and patter songs. And, of course, love songs, but not mushy, stupid ones, but haunting and evocative ones which send the narrative hurtling along in interesting and absorbing ways.”

“Bound together by bewitching music, ‘the dreaming’, much like Shakespeare’s original, is a charming mix of magic, mayhem and madness.”

“Here’s a gorgeous, musically enveloping dream of a show that takes a beloved Shakespeare play and delicately transposes it to a pre-First World War English country idyll, over which dark shadows will soon be cast. But, for now, more innocent romantic reverberations are set in place by mischief afoot in the supernatural world, in which two eloping lovers Alexander and Charlotte versions of Lysander and Hermia find themselves pursued into the woods by Charlotte’s fiancee David and Jennifer, David’s former betrothed Demetrius and Helena.

There they fall prey to the transformative potions that Jack Puck is assigned to entangle them with. Charles Hart’s smart, witty and affectionate book also cleverly folds in equivalents to Oberon and Titania, as well as a full set of the Mechanicals, rehearsing this own pageant about the legend of St George. Shakespeare’s original plot and this fresh take on it are seamlessly interwoven, but it is composer Howard Goodall’s heady, heavenly melodies that maintain and project an eerily captivating sense of strangeness and intrigue”

Howard Goodall’s music has a warmth and humanity to it which makes it a constant pleasure to listen to, as well as an emotionally engaging experience.  He focuses on harmony and hope, and even the saddest events are tinged with a sense of the greater picture and a sense that things can be better in the future.

First performed at the Northcott Theatre Exeter, at the Edinburgh International Festival and at the Royal Opera House, Covent Garden’s Linbury Theatre, in 2001, the dreaming has been delighting audiences in the UK, Australia, The Netherlands, South Africa and the USA (Off-Broadway première Nov 2015) ever since.

Its première cast in 2001 included Ben Barnes, Lily James, Jamie Campbell Bower, Dominic Tighe, Gloria Onitiri, Sophie Cookson and Sian Reese-Williams, who won the BBC London Theatre Award for Outstanding Performance in a musical in 2001 for her role as Jennifer).

Heart of the Wood

Catch me if you can

The Dreaming – The Rising of the Sun

The Banner of St George

A Dutch language version of The Dreaming is available on request. 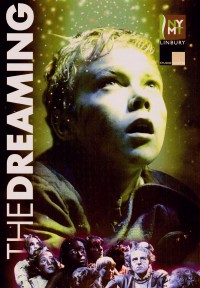